This weekend marks the end of Daylight Saving Time for 2019. For some, it begins the dark season: shorter days, dusky late afternoons, and start of the depressing winter ahead. Maybe I’m weird but I love the change one hour backwards. It gives me license to climb into my coziest flannel pajama pants and my father’s old fleece quarter zip – at 4 p.m. It allows me to hunker down, to hibernate, and to savor every moment until March when I am forced to be a productive member of society once again.

In our house, the question “When do we change the clocks?” is asked as early as September 15. For us, it is a landmark event, not just because of our unbridled love of daytime pajama wear but also the fact that Tim loves changing the clocks. In the days before my Apple watch, I depended on the clocks in the house for my timely orientation. With Tim in charge, this dependency was problematic. Although a simple practice in theory, things went wrong, often. And while we seldom argue, more than once, changing the Timex alarm clock on the nightstand or the clock on the microwave brought us to blows (figuratively, of course).

For Tim, Daylight Saving rivals Christmas or Thanksgiving in importance. I half expect that we will memorialize it eventually with gifts or some sort of decoration, perhaps a special meal, or a song. But for now, I must remain vigilant, lest I fall into the trap of time confusion, set skillfully by the “Master of Clock Adjustment”.

I think back to the year that Tim reset the clocks, all of them – on the wrong weekend. So eager to embark on his cause, he ran through the house (yes, I can only describe it as “ran”), pressing the pluses and minuses on the digital displays and spinning the little grooved circle on the box beside the battery on the back of the analog devices. Unsuspecting, I set off to bed, planning to awaken at seven to prepare for Mass at 9:15 a.m. For some reason, I woke up, on my own, at 6 a.m., according to the clock beside me. Knowing that sleep would not resume, I bounded out of bed and headed to the front door to retrieve the Boston Sunday Globe on the front porch. With the house quiet and serene, I took my place on the sofa, the newspaper my only companion.

I turned on the stereo, soft and comforting, as a backdrop to the idyll. Feeling somehow proud of myself for getting up early and being so focused, as well as quasi-productive, I perused the paper with an air of self-satisfaction, barely hearing the music in the background; that is, until the DJ announced the time. It was actually 7:45, not 6:45. Shaken from my bliss, it took me a minute to absorb the reality that I was late versus early, dashing all of my visions of success and self-determination. But one thing was certain, the snoring man down the hall was a dead man (figuratively, of course).

As I assumed the task of redress, I pulled the covers from the Clock Master and alerted him to the issue. In my opinion, he did not see this as a big deal. He chuckled, and promised to fix the clocks after church. Seething, I did not let this mistake go, as you can see by my detailed description of events. And now, as a matter of course, almost thirty years later, I still remind him for weeks in advance to check the weekend for the time change to avoid another debacle. To his credit, he has not made this mistake again.

When my family gifted me with an Apple watch a few years ago, they were unaware of the additional value I would derive from this gadget, twice a year. Now when Tim changes the clocks at four p.m. on the day before, I will not be fooled. I can depend on my Apple watch to be truthful, even when my nearest and dearest engages in clock subterfuge. It’s a testy twelve hours to be endured. On the other side await my turquoise penguin pajama pants and Dad’s old fleece. Once my senses cease to be at high alert in the cause of time, my hibernation is my refuge and my reward.

In his defense, I would probably never change the clocks. I’m that variety of lazy so he really is performing a service on some level. In truth, Tim’s love of Time may be his only fault, so I really can’t complain (figuratively, of course). 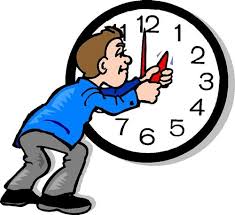