When I was a teenager in the 1970s, on just about every first day of school, the WBZ morning news on our kitchen television blared with the background theme to my bowl of Cheerios. Scenes of buses filled with kids of color being escorted through white neighborhoods, the sounds of violent protests, and images of police officers lining the streets to ensure safe passage to school buildings for little Black kids didn’t make much sense to me then. As a child, I also rode a school bus but none of those things happened in my neighborhood, just five miles from the Boston city limits. I thought briefly about how scary it must be to go to school, surrounded by upheaval. Then I happily went off to school without giving it much additional thought.

I grew up in West Medford, in a unique corner of a medium-sized city on the outskirts of Boston. Our area was special, with a small Black community woven into the fabric of our neighborhood. Life in West Medford included interracial interaction occurring naturally between the residents of ‘the Ville’ and us, the white people. We were neighbors. Living in this environment made it even more difficult to understand those scenes of the first days of school on the news. In a way, it made it even more difficult to understand racism.

When my father attended Medford High School in the 1930s, he formed colorblind friendships that endured for a lifetime. A man named Oscar Greene, a local author and memoirist, remained one of my father’s closest friends and, as a child, I often visited Oscar’s home with Dad, to drop off a tool or to just say ‘hi.’  My fondest memories of my days in an interracial Girl Scout troop at the Shiloh Baptist Church included learning to sew from Norma Jeffers, my beloved troop leader. I know that my experiences were unique. I also know that they made me a little ignorant of what it was like to be a Black person in America.

When I visited the Lyndon Baines Johnson Presidential Library in Austin last year, the experience brought back memories of my own life-the images that I saw as a child, my semi-charmed life in an interracial neighborhood, and my insulation from the continuing struggle that minorities face in America. Johnson was an interesting character. He spoke like a racist, calling Blacks by degrading names and putting on a good show for segregationists, who believed that he was one of them. When Johnson signed the Civil Rights Act of 1964 into law, he acknowledged the need to elevate the cause of equality and social justice. To some extent, Johnson recognized his own racism and understood that we all needed to do better, himself included.

How far have we come? I fear not very much. As I watch the protests that once again bring to light the need to reiterate the message that we are all equal, I think about my history lesson at the LBJ Library and the realization that our America qualifies civil rights, justice, and equality using a color litmus test. We do not yet live as equals and perhaps the Civil Rights Act of 1964 may not be worth the paper that LBJ signed in 1964 unless we recognize that, like Johnson himself, we still have work to do.

The passing of John Lewis brings our role as activists into sharper perspective. So many years ago, Lewis championed peaceful protest to affect change and, to some extent, change happened. But we remained ignorant of the on-going plight of Black Americans.  We lulled ourselves into believing that we had made steady, sustained progress toward equality. Or worse, we didn’t care about the economic disparity and injustice that Black Americans endure. The latter thought disgraces us as a country, and as human beings.

With the polarization of our country regarding the topic of race relations, unfair policing, and civil rights, we prove that have only begun, or worse, have reversed direction on the road toward a genuine belief that we are truly equal. Our commitment must go beyond planting a sign in our yards or a painting message on a street. Black men and women should not hesitate to walk our streets, fearing that they will be questioned or detained without reason. Our daily lives must embody inclusive and respectful actions. We must respond with outrage when the rights of the marginalized are violated. Only when we demonstrate truly deep-seated, universal protection of the rights of Black people as equally entitled to safer communities, the protection of voting rights, and fair treatment in the workplace will we change the way our society functions once and for all. 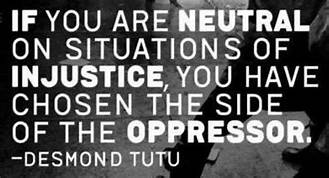