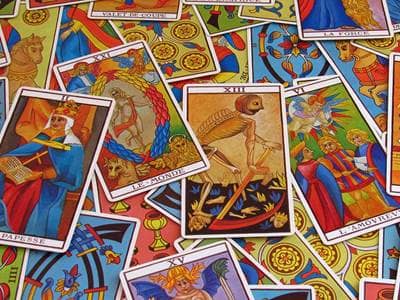 When life and fate take me by the hand and I find myself in the uncomfortable position of not knowing what could possibly happen next, my mind races. As I strive to regain my balance and right the ship of my life, I wonder how I ever lost control of my destiny. Fear, uncertainty, and dread seize my body and mind, and like a captive audience, I ride the wave of trepidation, with an acute hopelessness tinged with a tiny speck of optimism that it will all work out. But during that time in between, I always have my go-to, and when the going gets tough, the not so tough go to the psychic.

It was forty years ago this week that I first stepped into Regina Russell’s Tea Room in Quincy, Massachusetts. It was a day of firsts – on that very morning, Gail and I set off to get our ears pierced, again, adding an additional hole to one of our lobes, solidifying our renegade, “bad girl”, 70’s personas. No strangers to the world of fortune tellers, we had frequented the “Gypsy” in her tiny storefront on West Street, near Jordan Marsh,  for years. She told us of foreign men in our futures who would become our husbands, and tallied our future children by assessing the lines on our palms. It was dark and mysterious, and being “good” Catholic girls, we were dabbling in things forbidden. When she prepared to close her shop after many years, she offered us her home address in Somerville so that we could continue the conversation, but that just seemed a bit too dangerous. With no GPS tracking in those ancient times, we were pretty sure we disappear without a trace. So we abandoned our soothsaying friend and moved on to greener, psychic pastures.

When we arrived at Regina Russell’s on that fateful Thursday in November 1978, we paused in the angled parking lot surrounding the tiny white house, unsure about taking our curiosity to the next level. It was clearly some sort of organized operation, far from the dingy West Street storefront. On that day, and every time since, we were greeted by a “hostess”, who seats you at a table designated with a zodiac sign. Handing you a “menu”, she asked if we would like a drink, offering a limited choice of tea, coffee, or lemonade.  As we sipped our pink lemonade from little plastic cups, we perused the psychic options: tarot cards, playing cards, tea leaves, palm, crystal ball, jewelry, fire…or a combination, thereof. So many choices! The Gypsy was clearly an amateur! We were in the big leagues now.

On this inaugural day, I became a true believer.  Our reader, who is still there to this day, warned us that sitting together at the same table could be problematic to the reading since we were very close friends and, in so many words, the wires might get crossed. We poo-pooed the idea to separate, mostly out of fear, I think. Yet, true to his disclaimer, he confused our readings, warning me of a a kitchen with a red floor and a dropping glass that would smash into a million pieces. He noted that I would not drop the glass by accident but because of a startle. On the other hand, Gail would find herself in a hockey rink, wading through trash, cans, and newspapers. And it happened, except it was I, at Boston Garden, at an Aerosmith concert, navigating the trash filled ramps (the old Garden, that is), on my way to my seat. It was the ultimate “ah ha” moment. I knew instantly that this was the moment referenced in Gail’s reading. On the other hand, the next morning, Gail called to tell me that she broke a glass, on a red tile floor, while at her job at a bar, because someone slipped a piece of ice down her back. Armed with this credible proof, my psychic love life began.

Throughout the years, I have introduced many friends and family to the RR Tea Room, some of whom emerged as converts, others as confirmed skeptics. I can only speak for my own experiences and they have been powerful. In one spirit reading, the reader was in contact with a man, who was standing behind me (spooky!). He referenced a “J” name, and then a Tom, a Mike, another T (Terri?, no that’s not it…). In the end, she tapped into the names of all of my brothers and sisters-in-law, leading me to believe that it must be my father-in-law, Charlie. But when she told me that he was very excited about the baby, a girl, I pretty much told her she was full of it! Why, Lisa had only been married about 10 months at the time so a baby was not quite in the plans.  You can imagine my surprise (and hers) when three weeks later, Lisa announced her pregnancy. Apparently, I (and Charlie) were the first to know.

Around the time of the “big baby reveal”, my godmother passed, which was really why I sought a spirit reading that day. While I was not disappointed to hear from Charlie, I had hope that Julie would have come through. Fast forward one year, Lisa and I trekked once again to Regina’s, hoping to connect with my mother. While Lisa ducked into a small alcove with her chosen seer, I remained at a table awaiting my reading. When she emerged, in tears, twenty minutes later, she recounted the experience where my dear Julie came through. She thanked our family for taking care of her little white dog, for helping to clean out her house, and few other details known by a very few. In truth, Muffy, the little white dog we inherited the day Julie died unexpectedly while awaiting my visit that afternoon, was taking care of us. Julie worried about me and my caretaking role with my dad and I am sure that she left Muffy behind to supervise.

These are but a few anecdotes of the history of 40 years of readings. Using the information gleaned from my psychic encounters, I have planned trips, sold homes, and dealt with unruly teenagers. In one of my favorite experiences, while awaiting a closing date on our Hampton home that dictated our exit to the U.K. for ten days, I sought the guidance of a R.R. psychic. As we flipped the cards, she sought a clearer picture of the situation. She commanded me to pull four more cards from the tarot deck, all of them 7’s and 8’s. Taking a stab at the information revealed, she pronounced that the closing would be on August 7th, and that I should feel confident planning the trip for a departure from that day on. And so, the details unfolded – the closing was at ten a.m. on August 7th, and I was on a British Airways jet by ten that evening.

However, I do believe that you need to be of a certain sort to be open to these messages and to allow the psychic in. As a client, I have been identified by many readers to be gifted psychically as well. This fact I acknowledge, I fear, and I embrace, which causes me to dabble in the mystical. My grandfather also was whacked with the psychic stick and “knew things”. I know things. A lot. But I can never predict the accuracy or interpret the meaning, until it happens. In one case in 1979, while driving home from work with Gail (she is a theme, clearly), we came upon an accident scene and I knew that a friend was involved. I verbalized my concern in my usual impulsive way (when I “know” things, I just blurt them – without proof or reason), drove home, and then, troubled about the message, returned to the accident to assure myself that it was not his car, and hence, could not be him. When I received the call the next morning that the accident did involve my friend, Gail queried me as to how I knew. I had no idea but I was shaken.

In the clearest demonstration of any psychic prowess, I became physically ill (not illness in the strict sense, but a sense of dread permeated my body) prior to my mother’s passing in 2003. For two weeks prior to the event, I experienced a psychic heaviness, a weight, a darkness. I had changed jobs of my own volition just a month before and I was miserable. In my last conversation with my mother (who was not ill), I shared my concerns about my decision and she assured me that I would figure it out, I always did. I connected my dark feeling to my work situation and wondered just how long I could bear this pain. I often took in deep breaths and tried to release the tightness. I spoke of the feeling to Tim, and he, being firmly centered in this worldly plane, struggled with what I tried to convey. Three days later, as I sat in restaurant eating dinner, a sudden lightness pervaded my body. I felt better than I had in weeks and I noted this feeling saying, “Wow! I suddenly feel good!” and took in a huge, unencumbered breath.  Moments later, the phone rang and I was summoned home. At the moment that my darkness transformed, my mother had taken her last breath.

So, once again, I find myself questioning decisions, seeking a path to the future, and tapping into that part of me that rears its head occasionally.  I am not feeling dread, so I am pretty sure that no one is going to die, but I need some assistance in navigating my reality. And maybe for me, that is what psychics do. While they tap into their abilities, my own are enhanced and empowered, informing my thoughts and outcomes. In any case, I think it’s time for a trip to Quincy for a little pink lemonade and a chat – and, hopefully, a little empowerment, knowing that it all works out in the end, once you figure it out.