A few years ago, a dear friend faced a long recovery from a hip replacement surgery that sidelined him from his athletic training job at a local high school. As with anyone who enjoys exercise and movement, the thought of being sedentary for weeks gnawed at Peter. While he attended physical therapy sessions and walked the prescribed distances, he was antsy. He could only watch so much SportCenter in a day. Pete needed something else to fill his time.

When my husband and I embarked on a cruise with Pete and his wife Paula five years ago, Pete spent much of the trip regaling us with what he calls his “credos”, a litany of alliterative motivational phrases and sayings that he not only professes but lives by. With Rainman-like repetition, Tim and I endured the constant onslaught of Pete’s common sense revelations, at first thinking that the practice was odd. It seemed like Pete had devised a credo for just about every life situation. By the end of the seven day cruise, our cultivated and shared love of ‘Pete’s Credos’ made for fun and inspirational conversation. In a basic, almost primitive sense, the credos truly were a road map for life.

Some of my favorite credos I soon adopted as my own. The quasi-oxymoronic statement, “Negativity Sucks!”, a simple but true proclamation, was easy to remember and quick in its delivery. Others like “Visualize Victory” came in handy during our weekly trivia nights at a local bar, even if we routinely came in last. And my favorite, “Get Better at Getting Better”, embodied the simple idea that one should never give up. The credos became my mantra, too.

Being an incessant tease, I half-seriously prodded Pete to write down the credos. Paula begged me not to push the issue. She had heard enough of the credos and the thought of memorializing them made her crazy. To support my premise that the credos needed a larger audience, I insisted, citing the fact that I had been sharing the important messages contained in the credos in my counseling office at work.. Invoking the credo, “Always give your best effort”, I was relentless. Like Pete and his credos, it became a topic of most conversations, with me telling Paula,  “But there are no lies there! It’s all good information.” That pronouncement was usually met with a narrow eyed stare. Nonetheless, I didn’t give up. And what better time to transcribe those credos than when your legs aren’t working but your fingers are?

Peter embraced the idea of capitalizing on his convalescence to write down the credos, using Microsoft Word as creatively as Pete was able, inserting a decorative border to frame the numbered phrases. Once complete, Pete sent his son to laminate one hundred copies. The Mr. C’s Credos to Life were officially memorialized for all time, with copies available for the masses, or at least immediate family and friends.

Since there is nothing shy about Peter, the credos have been foisted on anybody brave enough to allude to one of the precepts that Pete espouses. As a major fangirl, I have been the proud recipient of multiple copies, which I share liberally. I proudly display my copies of the credos at my desk, on the bulletin board in the kitchen, on the mirror in my bedroom. The credos have traveled as far away as Austin, Texas, safely tucked into my suitcase, as a gift for my son’s edification.

As I write this Mami for Pete and his “Mr. C’s Credos to Life”, I smile to think that something so simple, a few phrases that embody “living your best life”, helped me through tough times in the recent past. When I was at my worst, Peter would ask me, “Are you living or just existing?” His question made me think critically about what made me happy and the changes I needed to make. I relied on the idea that one should not “pray for an easy life, pray to be a strong person” to manage hopelessness along the way.  Now when I get a wobble, I am reminded to “live daily with passion, energy, enthusiasm, and excitement”. And sometimes, a reminder is all you need. 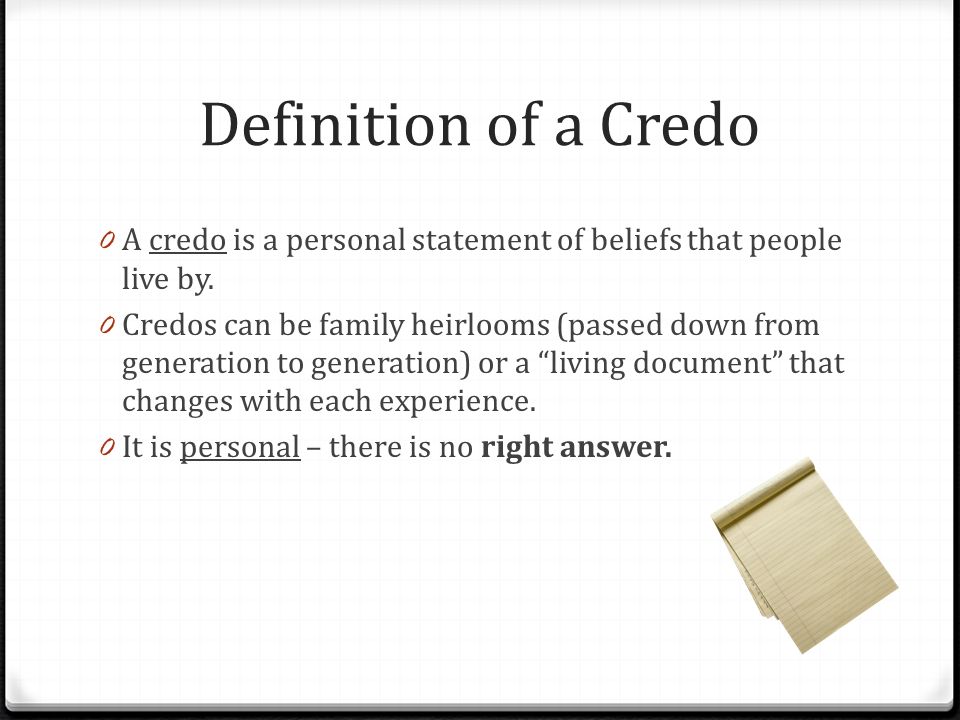