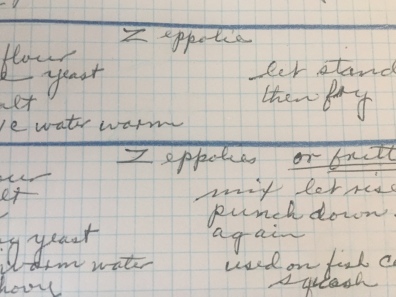 Every Christmas Eve of my childhood, two things were predictable at my grandmother’s annual gathering: the heavy, acrid smell of oil frying and the collection of Seven Fishes, in line with the ancient Italian tradition passed down to me by my immigrant predecessors. Italians love to cook, but they take it to a new level in this pungent celebration. A collection of exotic and, in my mind, a few unsavory items: eels, smelts, baccala, red clam sauce, tonno, and an array of alternates, dictated by each family’s custom, ensured that everyone overate. It was compulsory. But for my own dinner, my family heated up a Taste O’ Sea haddock dinner, complete with tater tots and unnaturally green peas to ensure that I ate something. In the opinion of my Italian grandmother, whom I called Nonnie, I was malnourished and possibly harboring a case of rickets. In truth, I just didn’t like to eat. In an Italian family, that was a crime punishable by force feeding, or at least, public shaming. In any case, I came from a long line of full-figured women (I am being delicate) so I am pretty sure that, subconsciously, even in my early days, I feared a similar fate; hence, I ate sparingly, agreeing to a small repertoire of options that I really liked. And the Christmas fish certainly were not on my menu.

Yet, there was one food tradition that I embraced – the zeppole. A ball of dough born from a simplistic combination of flour, water, salt, and yeast, coaxed into rising by a warm wet towel draped over the bowl, the zeppole was a thing of beauty. While some of the zeppoles concealed a bit of the baccala, or salt cod, Nonnie always made sure that there was a supply of zeppole untainted by any manner of fish, knowing my preference and serving her burning desire for me to eat. To the average person, the zeppole was a tiny version of glorified fried dough, not much more exciting than the beach boardwalk variety; but to me, the zeppole was Christmas, my childhood, and little did I know as a child, the legacy of my grandmother.

In my grandmother’s kitchen, a huge behemoth of a stove, emblazoned with the brand “Caloric”, was the centerpiece. On Christmas Eve, a steaming pan occupied every gas burner, but none so important as the blue porcelain pan of oil, ready to accept the scoops of batter and convert them into donut-like goodness. With a scary, blistering amount of spattering and fizzing going on, Nonnie always warned me to step back from the hot oil, at least until the initial introduction of dough was complete. Once in the oil, the beigey balls transformed into crispy golden orbs, and I was allowed to witness their conversion at a safe viewing distance. One by one, Nonnie scooped them from the pan with a slotted metal spoon and relocated them to a towel-laden, red Pyrex bowl where their numbers grew magically while nestled in the terrycloth. Once cooled, a small bowl of granulated sugar was at the ready, awaiting the golden, crispy, doughy balls. As I thoroughly coated each zeppole, my mouth watered in anticipation. To me, it was the flavor of Christmas.

By the time my grandmother passed away on Christmas Day in 1986, the Feast of the Seven Fishes had taken a new direction.  While not as grand, the Seven Fishes continued, except they now included things that the next generation preferred like shrimp, fried clams, crab cakes, lobster, and baked cod, as well as the customary linguine in clam sauce. My mother had assumed the tradition of making the zeppoles, without mention of the baccala lot. The recipe, found in a notebook and written in Nonnie’s handwriting, listed a number of possible variations in techniques and ingredients. But the one we chose to use was the one next to which Nonnie had scribbled “very good”.  And she was right.

Years later, we cherish the notebook that unlocks the portal of times and traditions that came before, and the people who left behind not just their recipes but their footprints on our hearts. The feast, or what remains, is now relocated to my own house, which annually wears the heavy smell of Christmas frying that lasts for days. The fragrant hangover is a small price to pay for the joy of savoring the taste of Christmases Past, the scent of frying dough, and a Pyrex bowl full of crispy dough balls, as I honor the legacy of my family, my Italian grandmother, and her “very good” zeppole recipe. 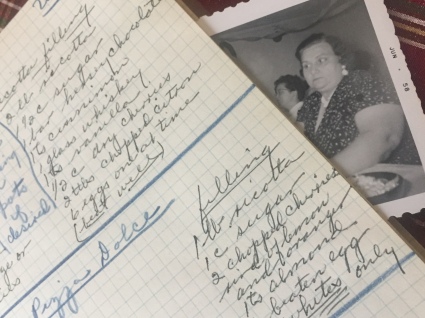