(Today is the thirty-eighth anniversary of the marriage of Charles and Diana. I wrote this piece a few months ago for my memoir writing group.  I thought that it was an appropriate tribute to this event.)

When I prepared to be married in 1980, at the age of 21, I dreaded the chore of planning the event, devising the guest list, picking bridesmaids’ dresses, and surviving the day, in general. With a goal of an understated affair, there was little joy in the process. Since our union was not blessed fully by our families, we possessed a combined resolve to “show them” and despite the objections, both verbal and tacit, we professed our vows. It was a day to endure rather than enjoy.  And amazingly, thirty-nine years later, we have endured, to everyone’s surprise.

Just a few short months after our own wedding, the excitement of a Royal Wedding seized the attention of the media and the world, making me feel a bit gypped!  How I had missed the boat, sacrificing my own happiness at the hand of the naysayers?  I somewhat had been robbed of the joy by my own circumstances.  In response, I threw myself fully into the marriage of Prince Charles and Lady Diana Spencer. She, like me, was quite young, making her a comrade in life inexperience.  I pitied Diana, so shy and reserved, as she assumed a position that thrust her and her life in a spotlight with a lens set on zoom. In the days before her wedding, she dodged cameras and paparazzi while making her way to and from her work in a preschool. The simple act of getting into her car caused mass hysteria. I watched rabidly anytime she appeared on my television screen. I purchased every People magazine with a cover picturing her or alluding to an article about her. I was obsessed, along with the rest of the world, all the while mourning my own loss.

The day of Charles and Diana’s July wedding was a work day for commoners like me.  While getting dressed for the day, I interrupted my routine as I scanned channels, assessing the quality of the news coverage and turning the dial of the mammoth Motorola T.V. set until I was satisfied with the camera angles and narration. Setting my VCR to “Record”, I left for work at the last possible moment, trying to not miss a moment of the simulcast festival of pageantry and fanfare.

That evening, my friend, Csilla, and I planned an evening dedicated to viewing all that my recorder had captured. Sitting on the floor in front of the screen, we watched eagerly as the carriage, reminiscent of the one that converted from a pumpkin to a coach for Cinderella, emerged from the palace with a glowing bride and her dad inside, off on a fateful journey to meet her Prince. As the gold and black orb made its way through the streets of London, the throngs along the route cheered. Once at St. Paul’s Cathedral, the ornate door of the carriage opened and the bride emerged, enveloped in a mass of layers and lengths of silk taffeta, which ballooned into a glorious cloud of fabric that seemingly lifted her up the stairs and into the church.  There were ruffles! So many ruffles! It was the world’s first glimpse of ‘the dress’. On first glance, I noticed that it looked a bit rumpled, perhaps indicating a poor choice of fabric, but that was where my critique ended. I was spellbound and more than a bit envious.

Once inside, the coy ‘Princess in Waiting’ portrayed a palpable timidity, teetering between being nervous and poised all at the same time. At the appointed hour, Diana floated down the aisle, with her procession of bridesmaids and pageboys and her trailing veil, transported on a puff of ivory to her Prince, who waited expectantly, bedecked in his military uniform.  I took in an excited breath, anxious and eager for the melding of these two hearts and for the possibilities of the royal life ahead for this young couple.

The ceremony was enchanting, with ethereal angelic singing and selections of instrumental classical songs written by British composers. As they spoke their vows, Diana stumbled over hers, transposing Charles’ many names, to the delight and amusement of the news correspondents from across the globe and the viewers at home, including me and my friend. The Archbishop of Canterbury, in his sermon, noted that this “was the stuff of which fairy tales are made”.  An ocean and a fantasy away, the image on my television was magical and spellbinding.   For Diana, in her speaking her vows, she unknowingly solidified the prospect of a future life of scrutiny and the end of her privacy forever.  For me, this glorious day gave birth to my life-long obsession with all things Royal.

Years later, armed with the knowledge of “the end of the story”, I fondly remember the very royal wedding of Prince Charles and Princess Diana with melancholy. Very common issues marred the fairy tale ending that I expected for them in my fantasy.  In the years after the excitement of the storied nuptials, Diana and I shared many life milestones. We had babies together and raised them in tandem. We wore similar hairstyles and loved designer clothing.  We shared a connection, while one sided, that was the commonality in being a wife, a mother, and a woman. Yet, my memories are tainted with sadness now that the story is done: a troubled marriage and the loss of Diana at an early age. I accept that child rearing, hairstyles, and a great wardrobe were where our connection ceased. In the end, my far less royal, understated wedding and somewhat uneventful, enduring marriage is the ‘true stuff’ of ordinary, common, and enchanting fairy tales. 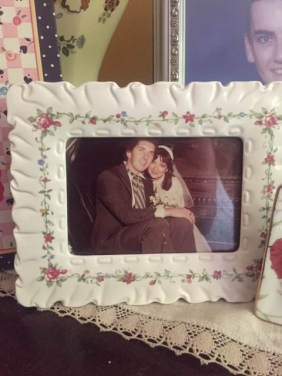 2 thoughts on “The Stuff of Fairy Tales”